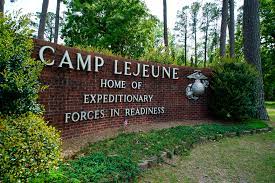 Camp Lejeune, a United States Marine Corps training facility, is situated on an area of 246 square miles near Jacksonville, North Carolina. With its 14 miles of beaches and proximity to two deep-water ports, this station is often used for amphibious assault training.
Since its founding in 1942, Camp Lejeune has provided temporary or permanent housing for thousands of military personnel and their families. In addition, it has functioned as a home or workplace for tens of thousands of civilian personnel and contractors. Camp Lejeune has its own public water system to serve Marines and civilians with potable water.
There were two potable water distribution facilities, Hadnot Point (1942) and Tarawa Terrace (1952), that had a long history of ties to the Camp Lejeune water pollution. The volatile compounds trichloroethylene (TCE), perchloroethylene (PCE), trans-1,2-dichloroethylene (DCE), benzene, and vinyl chloride polluted these factories.

In 1953, the opening of ABC One-Hour Cleaners, an Off-base dry cleaner across the street from Camp Lejeune, caused the pollution of the water with dry-cleaning chemicals. Through improper chemical disposal and unintended leaks, it was considered to have contributed to the pollution. Later investigations demonstrated that these toxins contaminated the drinking water supply of Tarawa Terrace.
According to reports, the Hadnot Point Gasoline Farm had a massive fuel spill in 1979. It is anticipated that between 20,000 and 30,000 liters of gasoline products escaped during this event. It was believed that this was the source of water pollution at the Hadnot Point water system.
The Holcomb Boulevard water system began supplying areas formerly served by the Hadnot Point water system in 1972. Even though its water was not poisoned, it was sometimes augmented with water from Hadnot Point. Consequently, the inhabitants of these regions were still exposed to polluted water after 1979.
In the 1980s, environmental monitoring at Camp Lejeune found that the water supply for residents and personnel was shockingly polluted. In 1982, the Marine Corps determined that the aforementioned toxins exceeded EPA guidelines for safe drinking water. The Navy took the initiative between 1982 and 1984 to identify possibly polluted locations by analyzing neighboring water wells.
In 1985, the federal government closed the polluted water wells at Camp Lejeune. However, making the plants totally safe was a mammoth undertaking, and it was not until the end of 1987 that all the toxins in the water were eliminated. The Safe Drinking Water Act was enacted in 1972, but its rules were not published in the Federal Register until 1987. It is difficult to accept that the Navy and federal authorities were uninformed of water pollution dangers.
Unacceptable levels of PCE pollutants of concern (COCs) were found in soil and groundwater in 1989 by the EPA and the North Carolina Department of Environment and Natural Resources. The EPA designated the property as a Superfund site because it has an excess of toxic substances.
PCP was the top cause of birth abnormalities, death, and injury among Camp Lejeune water exposure victims in 1990, according to a CDC assessment. Since several miscarriages were recorded at the base camp, the Agency for Toxic Substances and Disease Registry (ATSDR) conducted a study in 1998, distributing questionnaires to pregnant women who stayed at Camp Lejeune between 1968 and 1985. More than 100 pregnancies resulted in children with cancer or birth defects, according to the research. This research prompted veterans who were uninformed of the water pollution at the time to link many of their diseases to chemical exposure.
Then, in 1999, 17 years after the discovery of water pollution at Camp Lejeune, former military men and citizens were informed of the presence of dangerous chemicals. The afflicted family were utterly distraught upon learning the source of their suffering.
On January 28, 2008, President George W. Bush signed H.R. 4986, the National Defense Authorization Act for Fiscal Year 2008, which required the Agency for Toxic Substances and Disease Registry (ATSDR) to develop a health survey to collect personal health information from all persons who could be identified as exposed to drinking water polluted with trichloroethylene (TCE), tetrachloroethylene (PCE), and other volatile organic compounds at Camp Lejeune.